Fast forward 15 years and the band has long been acknowledged as one of the finest of its kind anywhere, having performed just about every Sunday at a succession of locations in Ann Arbor, currently in residence at the Zal Gaz Grotto Club. They have also played the Ann Arbor Art Fair, the Grosse Pointe Unitarian Church Jazz Concert Series, the Genesee County Crossroads Village program, the Warren Jazz Festival, Ann Arbor Summer Festival’s Top of the Park, the Southfield Center for the Arts, and the International Association of Jazz Record Collectors’ Convention, the Grand Traditions Vintage Dance Academy’s Annual “Hot Jazz Ball”. In addition the band has performed at the University of Michigan League’s 75th Anniversary Celebration, Providence Hospital’s 2004 Gala, Catholic Social Services Fall Festival of Music, Windsor, Ontario’s Capital Theatre Jazz Concert Series and return engagements for many of the above events. The band’s first album Rhythm Club was released in 2006. Music from the C.D. is being used as the soundtrack for a “video history” presentation playing in the lobby of the newly restored and reopened Guardian Building in downtown Detroit, long known as "one of the most exuberant Art Deco skyscrapers in America".

Winner of the CURRENT Magazine Jazz Artist of the Year for 2004 and 2005, the band has been reviewed or had an article devoted to them in the Detroit Free Press, the Metro Times, the Ann Arbor News (twice), the Ann Arbor Observer (twice), and the South East Michigan Jazz Association Newsletter. In addition, P.O.R.K. were the subject of a group of University of Michigan M.B.A. students’ study on “High Performance Organizations!"

Music Director James Dapogny needs little introduction in the jazz world. Professor Emeritus of Music Theory at the University of Michigan, he has led his Grammy-nominated Chicago Jazz Band for over 35 years, touring across North America and releasing numerous acclaimed albums, including a recent project backing up the legendary Maria Muldaur in an album of early blues classics. He is the author of Jelly Roll Morton- The Collected Piano Music and in late 2002 took on the task of reconstructing the great jazz pianist James P. Johnson’s lost opera, De Organizer, which was given packed performances in Ann Arbor at the Power Center and in Detroit at Orchestra Hall. Band manager Chris Smith, originally a trombonist, learned to play Sousaphone (and cornet) just to give the Rhythm Kings the proper instrumentation and sound. He has performed as a trombonist fluent in all styles of jazz for 13 years all over the state of Michigan, throughout the U.S. and Canada, and in Europe, and is represented on approximately fifty jazz recordings.

The other members of the Rhythm Kings are the top musicians performing their type of jazz and dance music in the state. All highly skilled jazz soloists, every one of the band’s members relish the opportunity to be a part of something bigger as a group. Collectively they are an organization of gifted, dedicated, disciplined and fun-loving musicians who bring vast experience and huge talents to every performance.

Links to other items of P.O.R.K. interest

Dapogny and Smith recruited the very best musicians they could find for the job, and were surprised to find how easy it was to get them to sign on to the project. 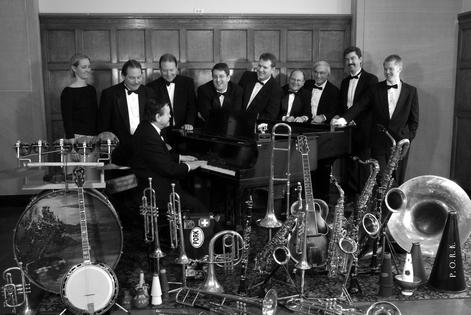 Read reviews of P.O.R.K.   (click on each to open the article in a new window)